However in August 2012 the company shelved plans for an open-cut mine, saying that a smaller version of the project will be considered in coming years. The existing underground mine will continue operating. 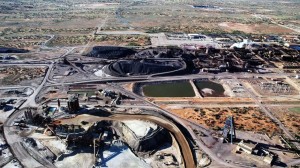 The company has not been required to study the viability of mining copper, gold and silver without also extracting and selling uranium − an option (PDF) which would allow for ongoing, profitable mining while addressing at least some of the major problems.

The mine operates under the Roxby Downs Indenture Act, which provides overrides and exemptions from the SA Aboriginal Heritage Act. BHP Billiton is in a legal position to determine what consultation occurs with Traditional Owners, who is consulted, and nature of any consultation. The company decides the level of protection that Aboriginal heritage sites receive and which sites are recognised. It is ironic and hypocritical that BHP Billiton supports Reconciliation Australia’s ‘good governance’ program and has provided over $2 million to Reconciliation Australia, yet will not relinquish its exemptions from the Aboriginal Heritage Act. 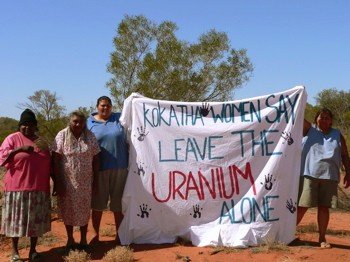 The Indenture Act also allows wide-ranging and indefensible exemptions from key environmental laws such as the SA Environmental Protection Act 1993, Freedom of Information Act 1991, and Natural Resources Act 2004. Those exemptions were retained when the Indenture Act was amended in 2011 in preparation for the planned expansion. The amended Indenture Act lapses in December 2012 and will need to be renegotiated if BHP Billiton revives its plan for an open-cut mine in some form or other.

The only politician to insist on some scrutiny of the amended Indenture Act was SA Greens MLC Mark Parnell. He was accused of holding the state’s economy to ransom. The transcripts of his late-night Parliamentary questioning of the Labor government are posted here and here. Time and time again the government spokesperson said that BHP wanted such-and-such a provision in the Indenture Act, and the government simply agreed without further consideration or consultation.

Olympic Dam is a state within a state − and it has shades of a Stalinist state. When a mine worker provided the media with photos of multiple leaks in the tailings dams in 2009, BHP’s response was to threaten “disciplinary action” against any workers caught taking photos.

Mining consultants Advanced Geomechanics noted in a 2004 report that radioactive slurry was deposited “partially off” a lined area of a storage pond at Olympic Dam, contributing to greater seepage and rising ground water levels; that there is no agreed, accurate formula to determine the rate of evaporation of tailings and how much leaks into the ground; and that cells within a tailings pond covered an area more than three times greater than recommended, requiring “urgent remedial measures”.

Under the open-cut mine expansion plan, the production of radioactive tailings, stored above ground, would increase seven-fold to 68 million tonnes annually. The tailings contain a toxic, acidic soup of radionuclides and heavy metals. There have been numerous spills and leaks – e.g. in the mid-1990s it was revealed that about three billion litres had seeped from the tailings dams over two years. 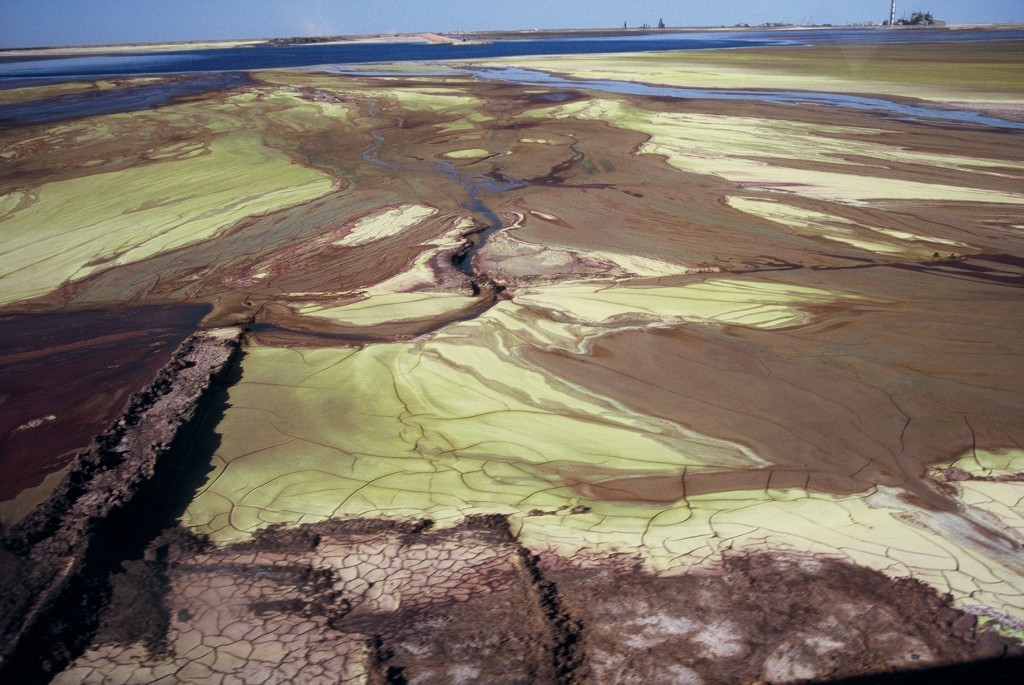 In 2010, a mine worker was sufficiently concerned about occupational health issues at Olympic Dam that he leaked information to the media. The leaked documents show that BHP uses manipulated averages and distorted sampling to ensure its official figures of worker radiation exposure slip under the maximum exposure levels set by government. The risks will escalate with plans for a massive expansion of the mine. The BHP whistleblower said. “Assertions of safety of workers made by BHP are not credible because they rely on assumptions rather than, for example, blood sampling and, crucially, an assumption that all workers wear a respirator when exposed to highly radioactive polonium dust in the smelter.”

Uranium production at Olympic Dam was expected to increase to 19,000 tonnes per year under the open-cut expansion plan, sufficient to fuel 95 power reactors which would produce 2,850 tonnes of high-level nuclear waste per year (in the form of spent nuclear fuel). That amount of spent fuel contains 28.5 tonnes of plutonium − enough for 2,850 nuclear weapons each year.

BHP Billiton sells uranium to nuclear weapons states in breach of their NPT disarmament commitments, dictatorships, states refusing to ratify the Comprehensive Test Ban Treaty, states blocking progress on a Fissile Material Cut-Off Treaty, states with a history of secret nuclear weapons research, and states stockpiling ‘civil’ plutonium. A new low was set in 2006 when the federal government, with BHP Billiton’s support, negotiated a uranium export agreement with the secretive, repressive, militaristic, undemocratic regime in China. The expansion of the Olympic Dam mine is heavily predicated on the export of copper-uranium concentrate to China.

“BHP’s reluctance to seek a partner for an expanded Olympic Dam project in South Australia may surprise as it’s stuck on the back burner, squeezed by low commodity prices and high development costs estimated by analysts at around $30 billion. In August last year, BHP said it would look for a less costly design for the Olympic Dam mine, which had been expected to bring in billions in tax dollars and create thousands of jobs. Up to now, it hasn’t announced any new plans for the site. At first glance, finding a competitor to share development costs and risks with BHP makes sense. If they also bring in new technology then so much the better. The problem for BHP is that a partner might actually want to get the project moving, even at a much-reduced scale. That would test BHP’s desire to keep annual spending below $15 billion in future, down by a third from last year’s bill totaling $21.7 billion. With uranium prices continuing to hover near eight-year lows, and several countries debating nuclear power in their energy mix, BHP can avoid such tough decisions by keeping full control of the asset.” — Wall Street Journal, 10 Dec 2013.

Videos about Olympic Dam mine:

Above and below: Over 500 people attended the Lizard’s Revenge protest at Olympic Dam, July 2012, despite the risk of the sort of police brutality faced by protesters at Beverley a decade earlier. www.lizardsrevenge.net 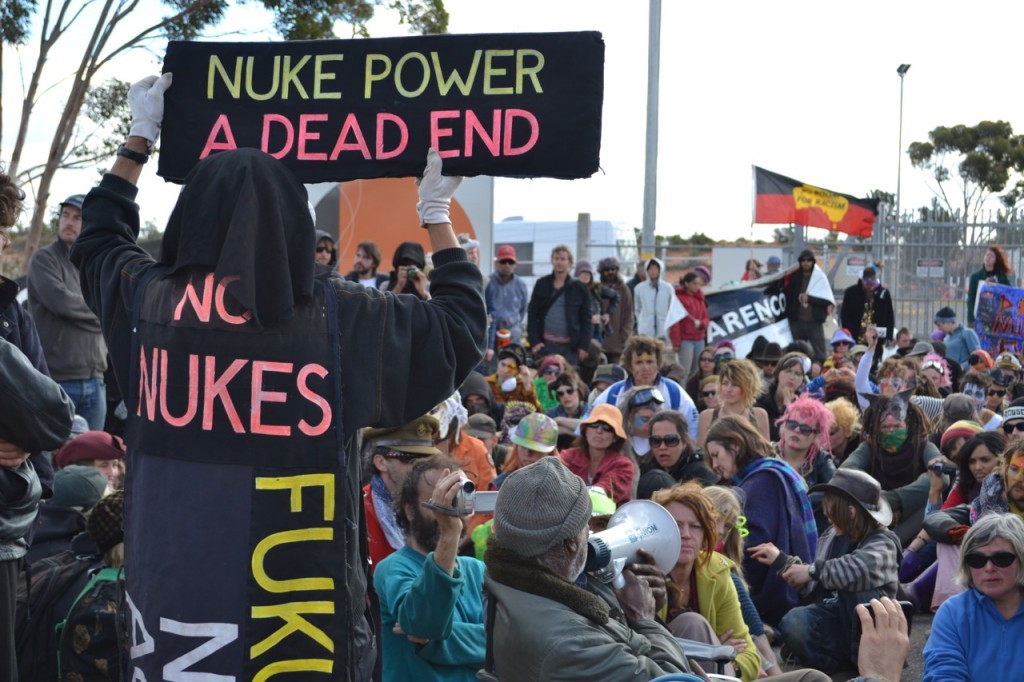 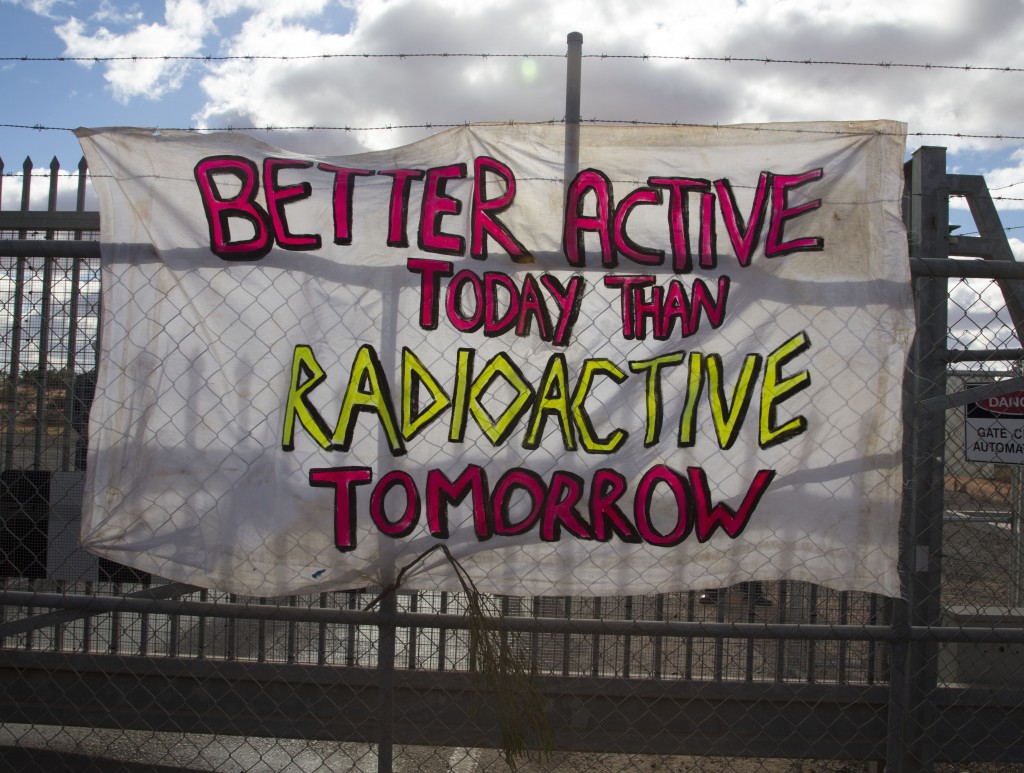 The British government / military conducted seven nuclear weapons tests at Maralinga in 1956-57 (and two tests at nearby Emu Fields). Maralinga was also the site of a large number of ‘minor trials’ or ‘safety tests’ which resulted in extensive local radioactive contamination.

A number of Aboriginal people were moved from Ooldea to Yalata prior to the 1956-57 series of tests at Maralinga, and this included moving people away from their traditional lands. Yet movements by the Aboriginal population still occurred throughout the region at the time of the tests. It was later realised that a traditional Aboriginal route crossed through the Maralinga testing range. There are tragic accounts of Aboriginal families sleeping in atomic bomb craters. Native Patrol Officers had the impossible task of patrolling thousands of square kilometres of land. 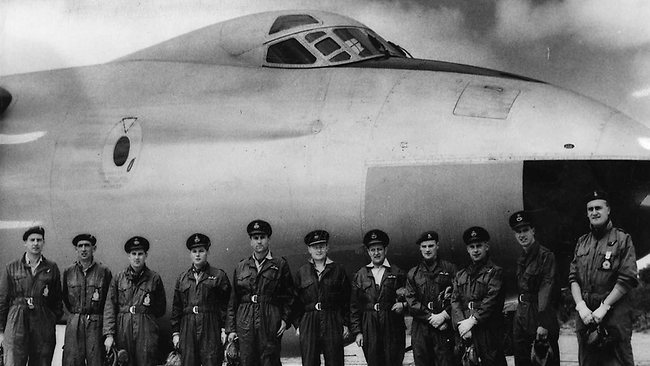 A Valiant bomber used to drop a nuclear bomb at Maralinga.

In relation to the Buffalo series of tests in 1956, the Royal Commission found that regard for Aboriginal safety was characterised by “ignorance, incompetence and cynicism”, and that the site was chosen on the false premise that it was no longer used by the Traditional Owners. Aboriginal people continued to inhabit the Prohibited Zone for six years after the tests. The reporting of sightings of Aborigines was “discouraged and ignored”, the Royal Commission found. 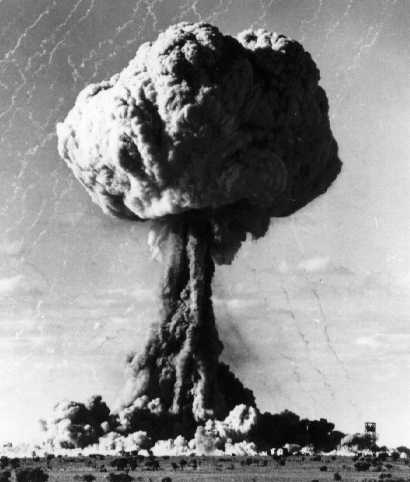 The British Government paid A$13.5 million compensation to the Maralinga Tjarutja in 1995. Other Aboriginal victims – including members of the Kupa Piti Kungka Tjuta – have not been compensated and have not received an apology.

Senator Nick Minchin said the Maralinga Tjarutja agreed to deep burial of the contaminated material – but the burial was not deep and the Tjarutja did not agree to it. Nuclear engineer Alan Parkinson, who advised the Maralinga Tjarutja on the clean-up and then became a whistleblower, said on ABC radio in August 2002: “What was done at Maralinga was a cheap and nasty solution that wouldn’t be adopted on white-fellas land”. US scientist Dale Timmons said the government’s technical report on the ‘clean up’ was littered with “gross misinformation”. Geoff Williams, an officer with the Commonwealth nuclear regulator ARPANSA, said the ‘clean up’ was beset by a “host of indiscretions, short-cuts and cover-ups”. Nuclear physicist Peter Johnston said there were “very large expenditures and significant hazards resulting from the deficient management of the project”. 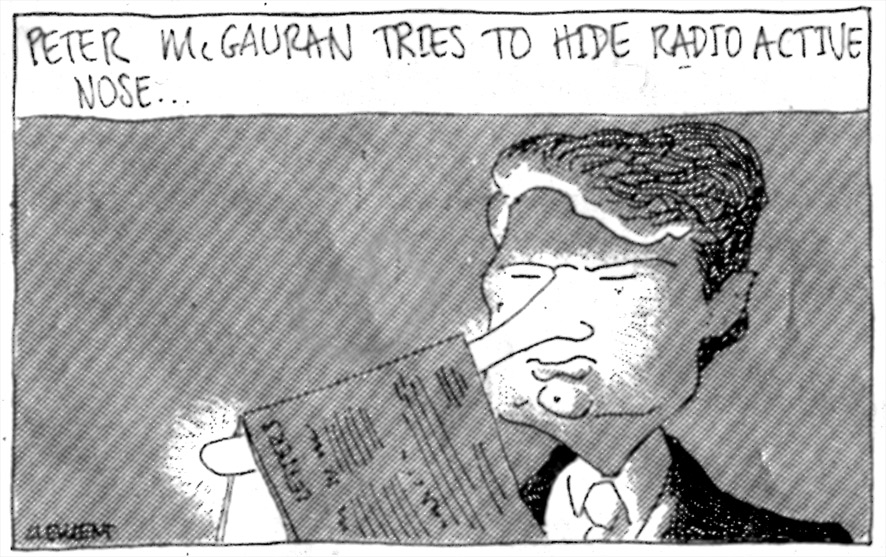 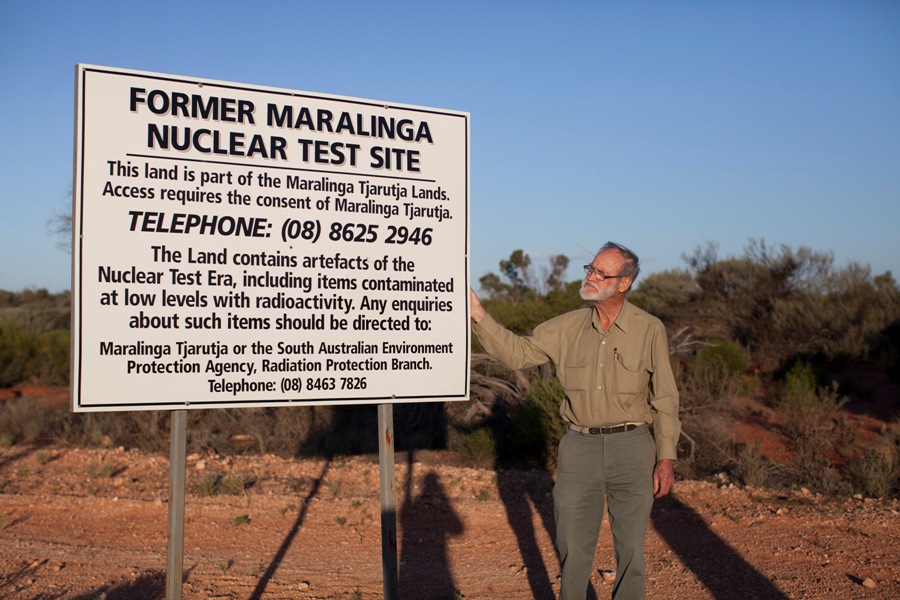 Below (three videos): Nuclear engineer Alan Parkinson discusses the problematic ‘clean up’ of Maralinga under the Howard government:

More videos about the British nuclear bomb tests in Australia: