Marathon Resources planned to establish a uranium mine at Mt Gee in the Arkaroola Wilderness Sanctuary (AWS). In 2008 the company was found to have illegally disposed of radioactive waste near Mt Gee. Although its exploration licence was later renewed, the South Australian government announced in 2011 that mining would not be permitted in the AWS.

Approximately 100 exploration holes were drilled at Mt Gee between 1969 and 1971 by the Oilmin Group. (Oilmin also discovered the nearby Beverley deposit to the east around the same time. The Mt Gee − Mt Painter mineralisation is also the source of uranium in the palaeochannels around Beverley.)

A May 1972 ‘Report of the Committee on Environment in South Australia’ by the SA government said that “if the exploration had been conducted under the provisions of the latest legislation, much less despoilation of the landscape might have occurred”. History would repeat itself with Marathon’s illegal and substandard practices at Mt Gee 40 years later. 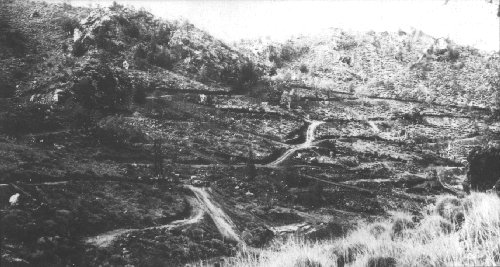 The Mt Gee uranium prospect near Mount Painter in 1970. 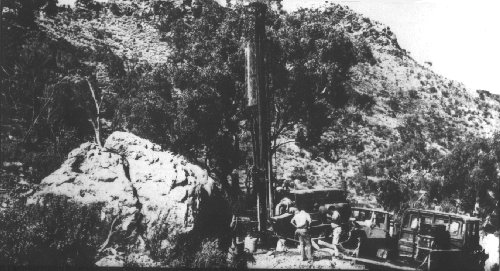 A percussion drill rig at the Mt Gee uranium prospect. Mt Gee is in the background.

In 2006, Marathon began uranium exploration at Yankalilla, near Myponga on SA’s Fleurieu Peninsula. Marathon chair Peter Williams said at the company AGM in November 2007: “For Marathon, at Myponga our exploration program met with a powerful community campaign that led to uranium exploration being ruled out in that location by the South Australian Government.” Then SA Premier Mike Rann said: “Under Don Dunstan’s 1971 Mining Act companies have a legal right to explore, but while I’m premier of the state there will be no uranium mining established anywhere near the Myponga Reservoir.”

History would repeat itself with the SA government’s 2011 decision to ban mining in the AWS. The Sprigg family, who have owned and run an eco-tourism operation at Arkaroola for many years, spearheaded the campaign against mining at Arkaroola. The AWS is on the Register of the National Estate and it is a Sanctuary under the National Parks and Wildlife Act. It is an Environmental Class A zone under the SA Development Act which only allows mining when the deposits are of such significance that all other considerations may be overridden. The Sanctuary is home to rare and endangered species including the yellow-footed rock wallaby and the short-tailed grass wren. Sir Douglas Mawson described Arkaroola as “one great open-air museum of geological history”. 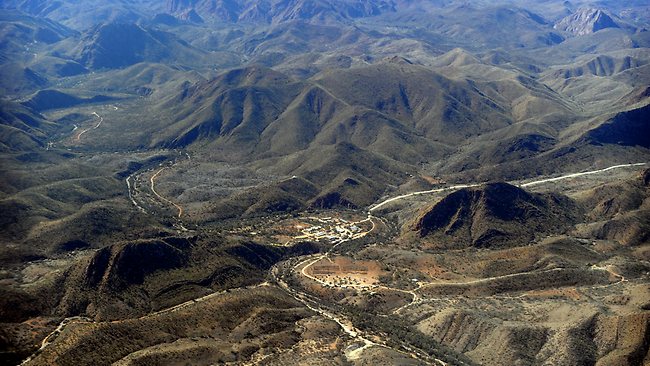 Marathon has had some colourful shareholder connections, including the China International Trust and Investment Corporation (CITIC) with strong connections to the Chinese military; and Ken Talbot, who was awaiting trial on charges of bribing a Queensland government minister at the time of his death in 2010. (And to the east of Mt Gee, the equally colourful Neal Blue, CEO of General Atomics / Heathgate, operates the Beverley uranium mine.)

In 2007 Marathon initiated a pre-feasibility study and an environmental impact study for Mt Gee. Marathon proposed an underground hard rock mine (tunneling into Mt Gee) and a new heavy haulage road across the Sanctuary to transport two million tonnes of ore annually to a processing site to be built somewhere on the plains near Lake Frome.

The SA government said that Marathon had breached its exploration licence conditions through:

In addition, the AWS managers noted other problems with Marathon’s activities at Mt Gee:

Before, during and after its illegal environmental activities at Mt Gee, the company promulgated familiar rhetoric. Marathon chair Peter Williams said at the company’s 2007 Annual General Meeting: “Building a world-class project with world-class environmental and safety standards is a challenging task, but we believe we have the right systems in place to achieve our goals”

In August 2008, the SA Department of Primary Industries and Resources approved a clean-up plan by Marathon. All mineral samples, including those containing naturally occurring radioactive minerals, were removed from bags and drums and re-buried under two metres of clean and compacted soil. The clean-up was approved by the SA government in April 2009.

Marathon chair Peter Williams said: “Throughout the review process, I came to the difficult realisation that this incident may in fact have been symptomatic of our culture and Marathon’s overall approach.” 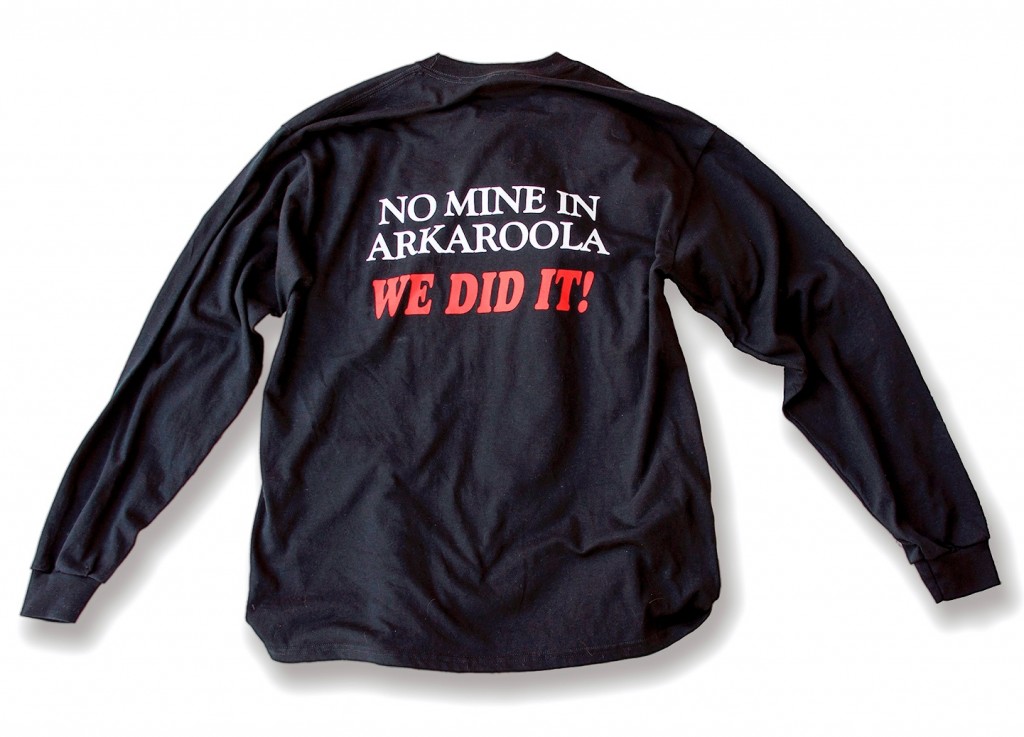 The SA government made a $5 million ex gratia payment to Marathon Resources in early 2012, acknowledging the costs incurred by the company during exploration. The payment was made despite the SA government’s stated view that it was under “absolutely no legal obligation to make a payment to Marathon Resources or its subsidiaries as a result of the decision to protect the Arkaroola region.” The government stressed that its granting of an exploration licence in no way committed it to permit mining. As a consequence of the agreement, Marathon ceased Supreme Court litigation against the government and the matter has been settled.

Marathon spent $20 million on Mt Gee in capitalised costs and $10m in written-off direct costs according to a report in The Australian. Marathon chair Peter Williams said the company had spent $15.8 million in exploration work at Mt Gee. 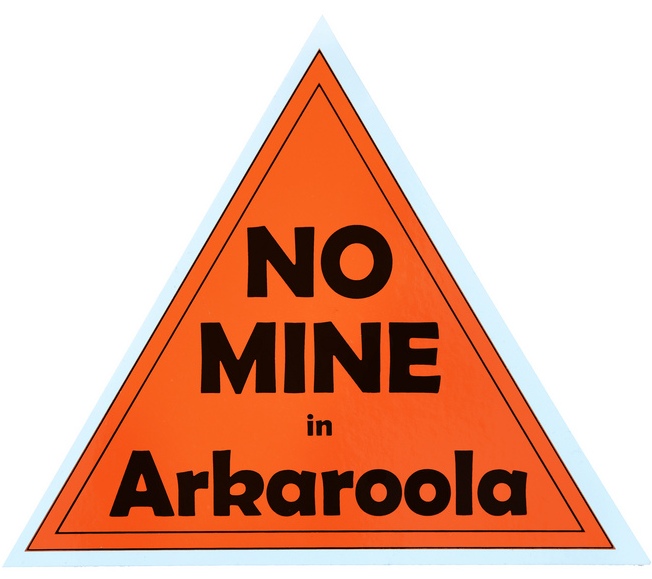 Supporters of uranium mining in the Sanctuary included AWU dullard Paul Howes. The decision to protect Arkaroola from mining was also opposed by the Australian Uranium Association and the SA Chamber of Mines and Energy. The Chamber’s CEO Jason Kuchel said: “the mining industry in this state has exhibited an exhaustive yet highly successful co-operative approach to environmental protection, cultural sustainability, workplace safety and site rehabilitation”.

Adnyamathanha woman Dr Jillian Marsh said: “Mt Gee is a very significant area to the Adnyamathanha people. It is in the path of Akurra the great spiritual serpent that drank Manda (Lake Frome) dry and travelled back to Yakki water hole where he now rests. Some Adnyamathanha today may not readily acknowledge the importance of our cultural knowledge about the Mount Gee area, but many of us know: ‘If the Akurra’s Back is Broken our Heritage will be destroyed forever’.”

After the government decision to protect Arkaroola, Adnyamathanha Elder Enice Marsh said it was a dream come true for Indigenous people to know the area would be protected. “I just want to thank the people that persevered with this and kept coming to our meetings so that we could document all this,” she said.

In November 2010, SA mining laws were revised to toughen penalties for companies guilty of breaches such as Marathon’s illegal waste dumping.

A bill to ban mining in the AWS passed the SA Parliament in February 2012. The Greens succeeded in making changes in the Upper House, including a requirement for traditional owners to be consulted over management.

In addition to its impact on Mt Gee, the protection of Arkaroola effectively reduced by 38% the size of exploration licence 3666 in which Alliance Resources holds a quarter interest.

Radioactive waste being stored in shed in Arkaroola

IT’S the nuclear-waste facility that few people know about – 21 barrels of medium- to high-level radioactive material stored in a tin shed in South Australia’s Outback paradise.

The waste is in the heart of Arkaroola, the Outback wilderness sanctuary the State Government hopes will one day be included on the World Heritage list.

The facility, known as Painter Camp, is not registered under the Radiation Protection Act and a management plan for its safe and secure operation is still being developed. …

The Department of Manufacturing, Innovation, Trade, Resources and Energy inherited the radioactive materials and Painter Camp in October after it advised Marathon Resources on how to upgrade the facility.

The EPA and Arkaroola Wilderness Sanctuary also were consulted in the upgrade, which added a series of secure above-ground vaults for storing trays of drilling core samples, and the storage shed. …

An EPA spokesperson said DMITRE has applied to have the facility, which sits in a gully in the shadows of uranium-rich Mt Gee and Arkaroola’s famed Ridge Top Track, registered under the Radiation Protection Act.

The EPA did not elaborate on the radiation levels of the materials, however, it is known radiation levels of the materials stored inside the barrels were too high for it to be returned to the ground during a rectification clean-up Marathon was ordered to take by the EPA in 2009. Most of the barrels now in the shed had been buried by Marathon as a way of disposing of them.

Arkaroola Wilderness Sanctuary including the Sprigg’s campaign against mining at Mt Gee:

Lots of information and photos by Bill Doyle: http://unknownsa.blogspot.com.au

If and when that website disappears, here is an archive: http://web.archive.org/web/20110706125226/http://www.markparnell.org.au/campaign.php?campaignn=19

Some news reports on the decision to ban mining in the AWS: 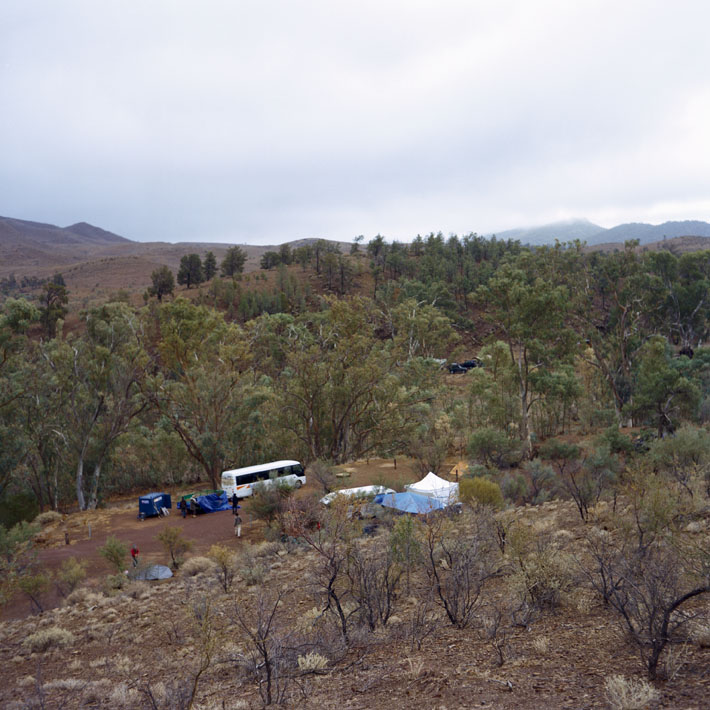 Friends of the Earth ‘Radioactive Exposure Tour’ — visit to Arkaroola, 2008. 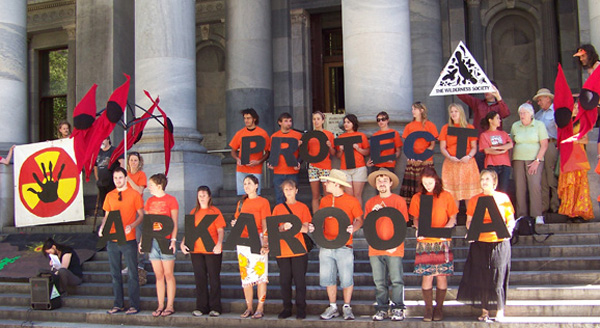