Mt Painter is located 110 kms north-east of Leigh Creek in the Lake Frome area of South Australia. The Mt Painter uranium deposit is sometimes confused with the nearby Mt Gee deposit, and has also been referred to as Armchair and Streitberg. In general it is best to think of the region as a series of small deposits known as Mt Painter. The Mt Gee − Mt Painter mineralisation is also the source of uranium in the palaeochannels around Beverley, a few kilometres east. 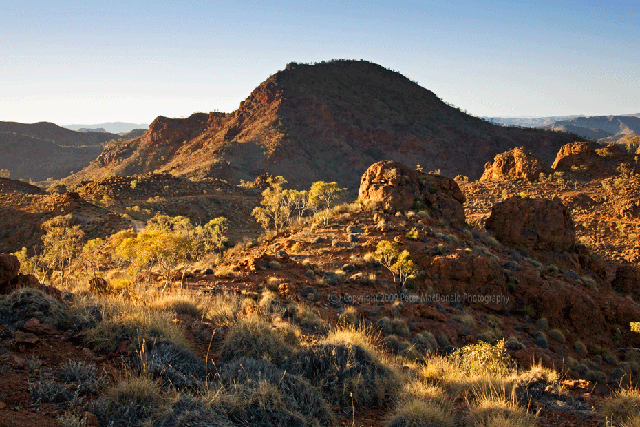 Uranium-bearing minerals were discovered in the region by G.A. Greenwood, son of a local pastoralist and prospector, in 1910. This discovery, on what was later named Radium Ridge, was exploited for radium by the Radium Extraction Company of South Australia Ltd (RECSAL). Many prominent locals from the nearby mining town of Leigh Creek bought shares in RECSAL, in the spirit of the mining boom of the time.

The company opened up several other deposits during the next two years, the largest being the No. 6 workings near Mt Painter. Ore was shipped to Europe until the outbreak of war in 1914 and the company went into liquidation in 1917. (Sir) Douglas Mawson had some uranium from the region shipped to France, where Nobel Prize winner Madam Marie Curie was involved in radioactivity research.

The workings were reopened in 1923 by what was to become the Australian Radium Corporation. Lack of water prevented the erection of a leaching plant on site, and a small crushing and screening plant gave unsatisfactory results. Camels were used in the rugged terrain to carry crude concentrate and hand-picked ore to less hilly country, where it was transferred to motor lorry and carted to the railway at Copley. From there it was railed to the Dry Creek treatment plant. Both the Mount Painter and Radium Hill deposits were mined intermittently until the early 1930s, when mining ceased. The minerals were processed for their radium content which commanded a high price for the use in medicine. Uranium itself had little use then and interest only increased after 1939 with the discovery of nuclear fission. The Australian Radium Corporation ceased operations in 1932. Exploration at Mt Painter resumed in 1944 in conjunction with re-examination of Radium Hill and other uranium deposits for potential use in allied nuclear weapons projects. Roads were constructed into the workings and camps erected, but the deposits proved to be low grade and uneconomic. Drilling and underground development was continued at East Painter by the South Australian government. The East Painter Camp accommodated up to 60 workers and was equipped with a canteen, bunkhouses, and garages. The project was abandoned in 1950 and the East Painter Camp dismantled.

Between 1968 and 1971, a consortium of mining companies discovered further uranium deposits including the richest and most easily accessible at the Hodgkinson Project. The total uranium resource outlined at Mt Painter by Oilmin was about 3,800 tonnes of U3O8 at an average grade of 0.1%. Transoil also prospected with Oilmin at Mt Painter. More than 7,000 tonnes of U3O8 in a number of small deposits were located. Like Oilmin and Petromin, Transoil was partly controlled by the interests of Bjelke Petersen, the ex-Premier of Queensland. 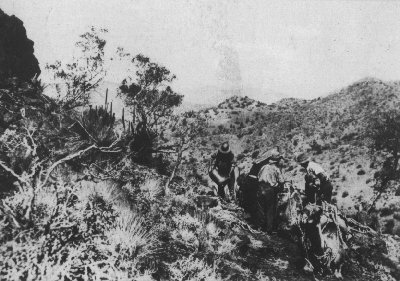 Above: Camels being loaded with hand selected ore at the No. 6 workings, near Mt Painter, at about 1912. The ore was carried west along the camel pad at the base of Radium Ridge to Blue Mine Creek for motorised transport to the railway at Copley. The dark outcrop at top left is mainly hematite, and contains the uranium minerals. 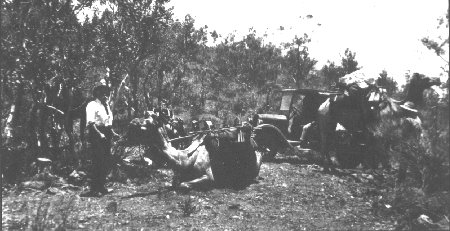 Above: Transferring supplies from motor lorry to camel near Blue Mine Creek in 1926. The lorry carted ore and concentrates to Copley for railing to the Dry Creek radium extraction plant. 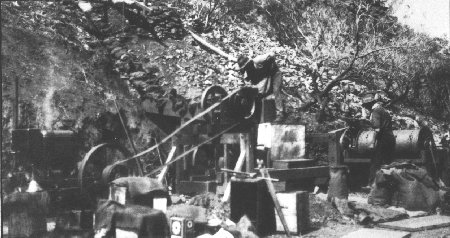 Above: Concentrating plant at the No. 6 workings in 1926. Bagged ore was dropped from the mine to the plant down a chute at top left. One of the workers is emptying ore into a small belt-driven jaw crusher; the crushed rock was fed into the ball-mill at right for grinding prior to sieving. The product was sent to the treatment plant at Dry Creek 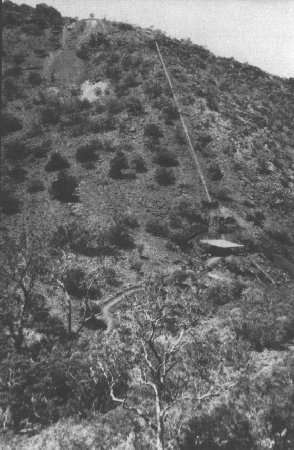 Above: Camels at Mt Painter Camp in 1944. Radium Ridge, site of the original uranium discovery, is in the background. Camels were preferred to horses owing to the lack of permanent water in the area. A well which produced good quality water was sunk a few metres from the eucalypt tree at extreme right.

Above: A 1947 view of East Painter Camp which accommodated up to sixty workers and was equipped with a canteen, bunk-houses, and garages. It was erected in 1944 and dismantled in 1950. 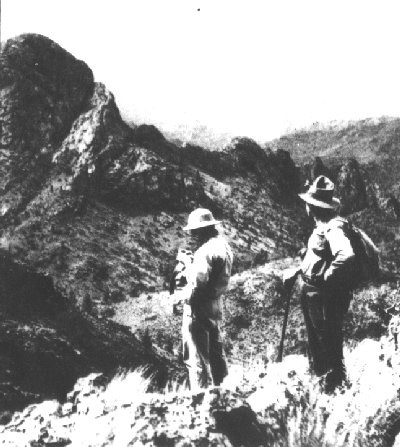 Above: Government geologists engaged in mapping and prospecting at Mount Painter in 1947. The prominent hill in the background is The Armchair. 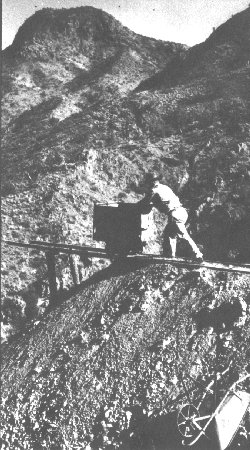 Above: Mullock being dumped at the mouth of an East Painter exploratory adit (mine entrance). Mount Painter is in the background.

Above: Official visit to the East Painter Camp in 1947. Mark Oliphant, the atomic physicist (later Governor of South Australia), is seated fourth from left next to the South Australian Premier, Thomas Playford. The Governor, Sir Willoughby Norrie, is seated to the Premier’s left, and seated at extreme right is Ben Dickinson, Director of the Department of Mines. 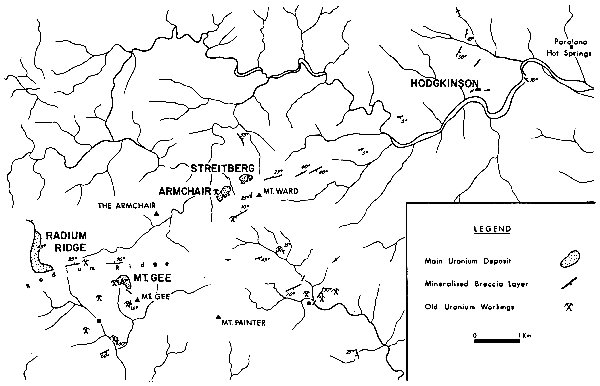 Above: A map of the uranium deposits in the Mt Painter region.

[This entry is a lightly edited version of material compiled and written by Dr Gavin Mudd and posted at the SEA-US archive.]