Since 2001 a fast-tracked in-situ leach (ISL) mine, the Beverley uranium mine, has been operating in the northern Flinders Ranges in South Australia. The mine is owned by General Atomics, a US-based company, and managed by its subsidiary, Heathgate Resources.

Heathgate sells uranium to nuclear weapons states which are in breach of their disarmament obligations under the Nuclear Non-Proliferation Treaty, to at least one country with a recent history of secret nuclear weapons research (South Korea), and to countries which refuse to ratify the Comprehensive Test Ban Treaty.

Heathgate has no plans to clean up the aquifer as it says the pollution will ‘attenuate’ – that the aquifer will return to its pre-mining state over time. This claim has been queried by the scientific community as being highly speculative with little or no firm science behind it.

Adnyamathanha Traditional Owner Jillian Marsh noted in her submission to 2002-03 Senate References and Legislation Committee that: “The government chose not to demand that the groundwater be rehabilitated, an unacceptable situation for the Australian public at large given our increasing reliance on groundwater and the increasing salinity of land surfaces and water systems.”

The 2003 report of the Senate Committee said:

The Committee is concerned that the ISL process, which is still in its experimental state and introduced in the face of considerable public opposition, was permitted prior to conclusive evidence being available on its safety and environmental impacts.

The Committee recommends that, owing to the experimental nature and the level of public opposition, the ISL mining technique should not be permitted until more conclusive evidence can be presented on its safety and environmental impacts.

Failing that, the Committee recommends that at the very least, mines utilising the ISL technique should be subject to strict regulation, including prohibition of discharge of radioactive liquid mine waste to groundwater, and ongoing, regular independent monitoring to ensure environmental impacts are minimised.

Heathgate’s activities at Beverley (and Beverley Four Mile) have been extremely divisive among Adnyamathanha Traditional Owners. Some Adnyamathanha Elders have formed an Elders Group as a separate forum from the Adnyamathanha Traditional Lands Association. Enice Marsh said: “There have been many attempts over the past 10 years to try and bring greater accountability to what’s happening in Native Title, and to stop the ongoing assault on our Yarta (country). Many of us have tried with very little resources, limited understanding of the legal system and environmental laws, and despite a mountain of bullying, lies and deceit from mining companies, lawyers, and self-inflated thugs in our own community who dare to call themselves ‘leaders’.”

Heathgate has a track record of secrecy, such as its failure to publicly acknowledge a series of leaks before the 2002 SA state election and its refusal to release key environmental reports until the South Australian Ombudsman found that its commercial-in-confidence claims were spurious.

Heathgate also has a disgraceful track record of spying on environment groups. GA / Heathgate has employed at least one private investigator to infiltrate environment groups in Australia. The infiltrator, known as Mehmet, had previously infiltrated green groups as part of an undercover police operation before he moved into the private sector to set up his own security company, Universal Axiom. He also provided personal protection to visiting GA executives. When asked about the company’s tactics, a Heathgate spokesperson said the company was privately owned and had a policy of not responding to media questions.

People who worked at Friends of the Earth at the time − around the turn of the century − say they were highly suspicious about Mehmet from the get-go. His activities might have been laughable and pathetic except that he provided exaggerated information about the likely attendance at a protest at the Beverley uranium mine in May 2000. That led to an excessive police presence at the protest and police brutality against environmentalists and local Aboriginal people including the capsicum spraying of an 11-year old Adnyamathanha girl. The following video clip details this brutality. Heathgate applauded the police action (in a 2000 media release which is no longer available online).

After a 10-year legal case, 10 people were awarded a total of $700,000 damages. Supreme Court Judge Timothy Anderson described the imprisonment of protesters in shipping crates as “degrading, humiliating and frightening” and noted that the action constituted an “affront to the civil liberties of the protestors”. He added: “The conditions were oppressive, degrading and dirty, there was a lack of air, there was the smell from capsicum spray and up to 30 persons were crammed into a very small space.”

The following video clip from ABC TV’s ‘Hungry Beast’ program explains some of the connections of Neal Blue, head of General Atomics. Over the years Blue has had commercial interests in oil, Predator drones, uranium mining and nuclear reactors, cocoa, bananas and real estate.

Radioactive spills and gas leaks at a uranium processing plant in Oklahoma led to the plant’s closure in 1993. The plant was owned by a GA subsidiary, Sequoyah Fuels Corporation, and processed uranium for use in reactors and for use in depleted uranium munitions. A nine-legged frog may have GA to thank for its dexterity. A government inquiry found that GA had known for years that radioactive material was leaking and that the radioactivity of water around the plant was 35,000 times higher than US laws permitted.

In 1992, a leak at the Oklahoma plant forced the evacuation of a building only two weeks after federal inspectors allowed it to resume operating. Later that year, the company announced that the plant would be closed after it had been ordered to temporarily shut down three times in the previous six years. Sequoyah Fuels Corporation President Joe Sheppard said the company could no longer afford rising costs related to regulatory demands.

The shenanigans and jiggery-pokery at the Oklahoma plant − documented by the World Information Service on Energy − include the disposal of low-level radioactive waste by spraying it on company-owned grazing land, and the company’s attempt to reduce the amount of property tax it paid on the grounds that radioactive contamination reduced the value of the land!

Fortune Magazine recounts one of the controversies surrounding GA / Heathgate’s uranium ventures in Australia. When uranium prices increased in the mid-noughties, the company was locked into long-term contracts to sell yellowcake from Beverley at earlier, lower prices. Heathgate devised plans to renegotiate its legally-binding contracts. Customers were told that production costs at Beverley were higher than expected, that production was lower than expected, and that a failure to renegotiate contracts would force Heathgate to file for bankruptcy.

However former employees said that Blue had allegedly directed Heathgate to increase its production costs. Customers were not told that bankruptcy was unlikely since GA had agreed to continue providing Heathgate with financial assistance. 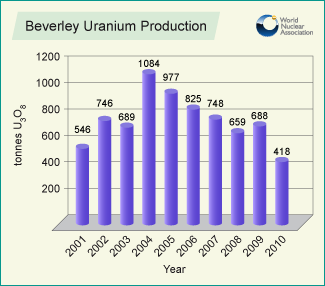 Two of Heathgate’s Australian directors, Mark Chalmers and David Brunt, consulted an attorney who advised them that the plan could be considered a conspiracy to defraud. Chalmers and Brunt left the company.

Exelon, one of Heathgate’s uranium customers, sued. The lawsuit was settled for about $41 million. Because of the increased uranium price, Blue ended up well in front despite the cost of the settlement with Exelon − more than $200 million in front by some estimates. Blue was unrepentant: “It made more sense to, in essence, just pay the fine.”

Blue has even been sued by his own company. Several years ago, ConverDyn, a uranium conversion plant jointly owned by GA and Honeywell, sued Blue, Heathgate and GA in relation to allegations of a failure to meet contractual obligations to deliver certain amounts of uranium.

GA / Heathgate has repeatedly flown US politicians (and their families and aides) to Australia for high-level talks and it has paid for Labor MPs to travel to the US. The company has used the services of PR firm Hawker Britton, which includes many former Labor politicians and staffers.

Money well spent, it seems. In 2006, then SA Treasurer Kevin Foley said: “I have visited the Beverley mine and, recently, in San Diego I met Mr Neal Blue, the chairman of General Atomics – an outstanding company that is producing uranium oxide from the Beverley mine. I only hope that further deposits of uranium can be found. The sooner we can find it, dig it up and get it out of the country, the better.”