In the late 1970s, the federal government was keen to open up uranium mining in the Kakadu region. First cab off the rank was the Ranger mine which was imposed on local communities despite the clear opposition of the of Mirarr Traditional Owners.

The nearby Jabiluka deposit, also on Mirarr land, was next in line. After six years of ‘negotiations’ over Ranger which ended in the mine being imposed against their wishes, the Mirarr and other Traditional Owners were exhausted. Despite their clear and continued opposition to Jabiluka, another two years of ‘consultation’ was forced upon them. People felt that the relentless meetings would continue until they complied with the government’s agenda and in 1982 then Senior Mirarr Traditional Owner Toby Ganagle said he was too tired to fight any more this was taken as consent for Jabiluka.

The mine remained undeveloped because of the federal Labor government’s no-new-uranium-mines policy from 1983-96. 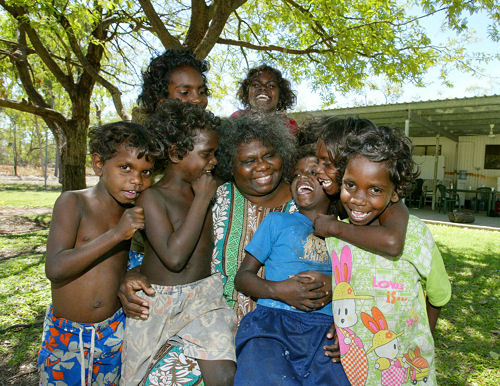 When the Howard government was elected in 1996 with an open-slather uranium mining policy ERA was keen to push ahead with Jabiluka. Mirarr remained steadfast in their opposition to further mining on their country and began working with supporters in the environment, peace, anti-nuclear and Indigenous movements from across the country and around the world.

The result was a huge domestic and international campaign against the proposed mine. The campaign involved inquiries by Australia’s Parliament, legal challenges to the mine, a national speaking tour of traditional owners, a protest camp hosting 5,000 people over eight months (527 of whom were arrested in peaceful protests – including Senior Traditional Owner Yvonne Margarula), large rallies in all major Australian cities, mobilisation of a national and international support base of tens of thousands of people, a speaking tour in Europe, lobbying to various international bodies including UNESCO (the World Heritage Committee recommended suspension of work at Jabiluka due to threats to Kakadu’s World Heritage values) and the UNHCHR, the European Parliament (which passed a resolution against Jabiluka in 1998) and the US Congress (members of which wrote a letter in support of Mirarr to President Clinton) and much more. Yvonne Margarula and the then Executive Officer of the Gundjeihmi Aboriginal Corporation, Jacqui Katona, jointly received the Goldman Environmental Prize in 1999 and in 1998 Yvonne was awarded the Friends of the Earth International Nuclear Free Future Award in recognition of her work on the campaign. These phenomenal efforts resulted in stopping the Jabiluka mine. The Mirarr signed an agreement with Rio Tinto in 2005 that prevents the mine’s development without the written consent of the Traditional Owners.

The Mirarr never accepted the inevitability of mining at Jabiluka, despite constant company, industry and government assurances that the project would go ahead. In their struggle to protect their country and culture they made Jabiluka a millstone for one of the world’s largest resource companies and have redefined future resource conflicts in Australia and internationally by elevating the rights of Indigenous people everywhere to determine what happens to their country and their community.

The Mirarr remain clear in their continued opposition to mining at Jabiluka and maintain their long-standing commitment to seeing the area permanently protected.

Below: Fight for Country