Robertson Barracks in Darwin is a major Australian Army base located in the outer Darwin, Northern Territory suburb of Holtze in the Municipality of Litchfield. The barracks was built during the 1990s. The Barracks are home to the 1st Brigade and the 1st Aviation Regiment. Robertson Barracks has a helicopter airfield, similar to Holsworthy Barracks.

Robertson Barracks is to be a future site of a United States Pacific Command Marine deployment, and its current capacity of 4,500 troops will be upgraded in the near future. Currently, the size and the accessibility of key facilities in Darwin follows closely with other US deployment sites around the globe. 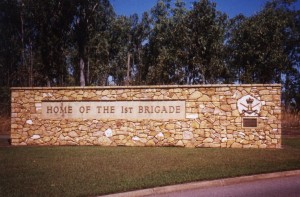