The Oban trial in-situ leach (ISL) uranium mine in north-east South Australia lies 105 kms from Broken Hill on Mulyungarie Station. It is owned and operated by Oban Energy, a fully-owned subsidiary of Curnamona Energy.

Curnamona Energy was set up by Havilah Resources in 2004 specifically to explore uranium deposits on its South Australian tenements. Havilah retained an interest of 45.4% in the company. Both Curnamona and Havilah have a number of exploration licences in the region, with Curnamona’s tenements covering 8000 square kms.

In April 2007, the Australian Government Department of Environment and Water Resources ruled that the proposed ISL trial mine was not a “controlled action” under the Environment Protection and Biodiversity Conservation Act 1999 (EPBC Act), continuing a trend begun in the late 1990s in the Beverley field trial approval process, leaving trial ISL mines outside the operation of the EPBC Act and its requisite environmental assessment processes.

Trial ISL mines have the same environmental impacts as commercial mines. As a Friends of the Earth briefing paper notes: “Despite being called ‘trials’, such mines inject real chemicals into real groundwater, extract real uranium and produce real radioactive waste.”

Field trials began mid-2010 and by late 2011 the trial was suspended due to low recoveries of uranium from the leaching process. Bench laboratory tests are currently being conducted with alkaline leachate (instead of acid), and (perhaps conceding that the problem may not be overcome) the company is re-evaluating the inferred resource estimate of the deposit.

As a result of the failure of the leaching process, the company directors have written off over $3 million in exploration expenditure associated with the Oban site. Exploration of other potential deposits with similar geological characteristics has ceased and associated capital expenditure written off. As of 31 January 2012, the company had available funds of approximately $1.52 million.

Curnamona Energy is currently in the midst of a merger with Havilah Resources, by way of an off-market takeover bid offering Curnamona shareholders one Havilah share for every five Curnamona shares they own.

Havilah is a junior explorer with the stated goal of becoming a significant copper, gold and molybdenum producer. It has extensive exploration tenements in the surrounding area, which are registered as seeking uranium amongst other minerals, but no operating mines as yet. Its nearby Portia open-pit gold mine is in the final stages of the approval process, and will see Havilah transition from an exploration company to production.

Update − December 2012: Havilah takeover now complete with the share buy-back leading to Havilah owning 91.37% of issued shares by June 2012. The remaining interest in Curnamona was compulsorily acquired by Havilah, and Curnamona Energy was removed from the ASX. 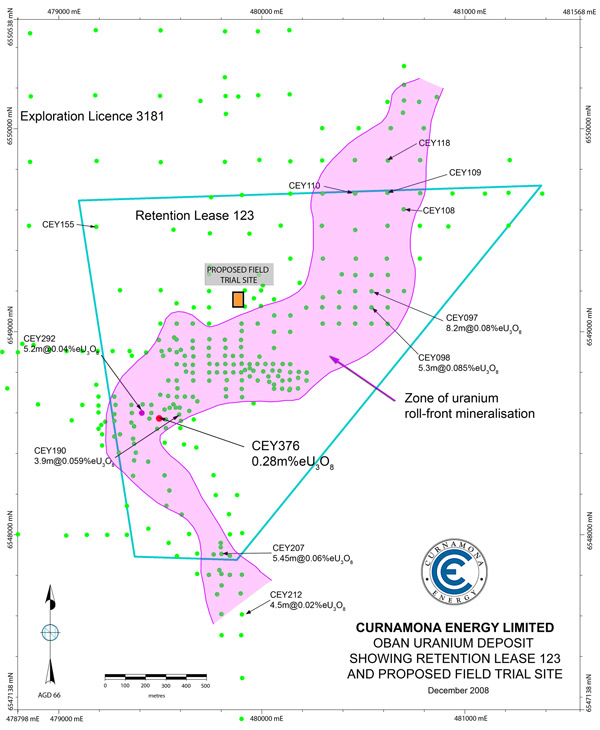