Queensland Mines mined the Nabarlek uranium deposit for four months in 1979. Milling of stockpiled ore commenced in 1980 and produced 10,858 tonnes of uranium oxide up to 1988 with sales to Japan, Finland, France, South Korea and the USA for civil power generation.

There is ongoing uranium exploration in the Nabarlek region. In early 2008 Uranium Equities Limited bought Queensland Mines, thereby acquiring the Nabarlek lease, and has developed plans to further explore the lease. A new Mining Management Plan was submitted and an exploration authorisation granted on 28 May 2008.

Altman and Smith state in a detailed briefing paper: “All told, in the period 1979-93 approximately $14 million was paid to Aboriginal people in the West Arnhem region with respect to the QML [Nabarlek] mine and it now appears clear that few resources have been utilised for long-term investments that would allow the creation of an economic base for future generations.”

“Queensland Mines’ dealings with the Oenpelli people were deplorable. In June 1970, the company dug exploration holes without permission, desecrating the Green Ant sacred site. Repeated actions such as this prompted the solicitor representing the Oenpelli to write to the NT administrator in 1972, stating: “Our clients are most concerned that Queensland Mines Ltd has in the past shown a complete disregard for their traditions and way of life … and has shown no willingness to cooperate or even communicate with our clients.”

“Other than direct confrontation, the company “communicated” its intent to mine by attempting to buy off the traditional owners with offers of sums which rose from a paltry $5000 in 1970 to $3 million by February 1974. When these offers were refused, Queensland Mines launched a malicious media campaign.

“In a submission to the Ranger inquiry on uranium in August 1976, the Oenpelli Tribal Council told the commissioners that “If Oenpelli had the power to make the final decision, it would oppose mining”. Despite the lengthy and determined opposition of the Oenpelli, Queensland Mines was finally given approval to go ahead in 1978.”

In August 1980, the Darwin branch of the Waterside Workers Federation refused to load Nabarlek yellowcake. In March 1981, the Darwin branch of the Seamen’s Union of Australia voted unanimously against carrying yellowcake. A combined union picket to prevent the shipment of yellowcake from Darwin was initiated in October 1981 and lasted six weeks until the ACTU executive stepped in and argued for the bans to be lifted.

Jon Land wrote: “In a move designed to maintain some credibility in the eyes of the anti-uranium movement and prevent disgruntled members leaving the party, [Prime Minister Bob] Hawke announced that Labor would maintain its ban on the export of uranium to France. The policy, which had been adopted at the 1982 national conference, stated that the sale of uranium to France could only be contemplated when that government ceased all nuclear testing in the Pacific. This had a significant impact on operations at Nabarlek as France was the major purchaser of the uranium mined and processed there. … But within six weeks of the 1986 conference the policy was ditched, supposedly to meet the needs of the August budget. … With the restriction on sales of uranium to France lifted, Queensland Mines was able to sell its 2600-tonne stockpile by 1989 and the mine ceased. The company then attempted to have prospects it controlled outside the original Nabarlek lease included as part of the three mine policy. This was opposed by local Aborigines and denied by the federal ALP government.”

Mudd details the corporate shenanigans surrounding the Nabarlek mine. A few excerpts follow:

“It was not until August 12, 1971, that the new Queensland Mines board and the public learned that the reserves amounted to only 8,932 tons (8,103 tonnes U3O8), some of which was at 16 lb per short ton and some at 240 lb. This was only one-sixth of the amount stated as indicated reserves a year before. The news shocked financial circles, despite persistent rumours that the mine might be downgraded. …

“The Rae Committee concluded: ‘On each of these selling occasions Mr Hudson [Roy Hudson, chair and managing director of Queensland Mines] was privately aware of developments which widened the glaring discrepancy between the ascertained geological facts and state of confident belief in the market to which he sold the shares. Each of the selling transactions coincided with an advance in his personal understanding of the discrepancy. Mr Hudson’s explanation of the sales does not alter the grave impropriety of the share dealings. This is a case of ‘insider trading’ with a peculiarly objectionable twist. The person who made profits from his possession of the information that made a mockery of the market’s belief in his company’s shares was also one of the persons responsible for misleading that market for a period of nearly a year.'”

Nabarlek is said to be the only mine which has gone through the entire cycle of commercial mining, mine closure and rehabilitation, but it still requires ongoing monitoring, which is carried out by government and funded by taxpayer. There have been ongoing site contamination and lasting impacts on water quality. Problems include significantly elevated gamma radiation rates compared to pre-mining as well as failure to achieve the reductions in radon emanation predicted for rehabilitation (Mudd, 2008).

According to the Office of the Supervising Scientist: “The tailings, and the material from the evaporation ponds placed in the pit in October 1992, represent a source of solutes which will affect groundwater quality in this area for the long term. Conductivity, sulphate, and nitrate values are continuing to increase in bores affected by the pit, while pH is decreasing.”

The 1985-86 OSS Annual Report stated: “Disposal of uranium mill tailings in surface dams, no matter how well stabilised and protected, almost certainly involves the acceptance of eventual tailings release to the environment. While this risk may be reduced … it is unlikely that any containment structure could remain totally impregnable to the natural processes of slow erosion over periods comparable to several half-lives of the longest lived isotopes retained in the tailings.” 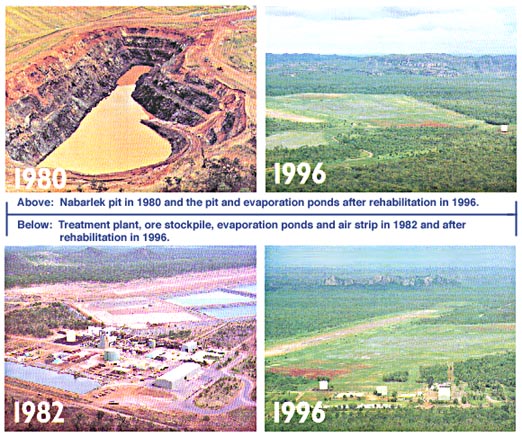 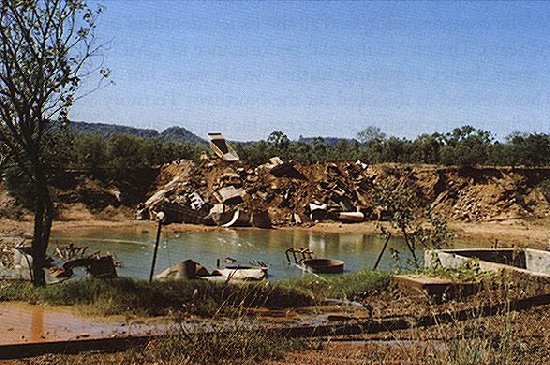 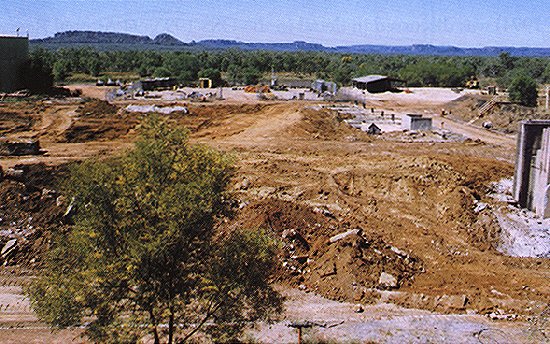