The Mulga Rocks uranium deposits are located west of Leonora in the WA goldfields on Wongutha country. Mineralisation consists principally of uranium, scandium, nickel and cobalt in lignite within a sedimentary basin.

The deposits were discovered by the Japanese Government-owned corporation, PNC Exploration Australia Pty Ltd, in 1979.

In January 2009 Energy & Minerals Australia (EAMA) announced a JORC-compliant inferred resource of 24,520 tonnes U3O8 averaging 0.055% at 200 ppm cut-off grade. The three main Mulga Rock deposits are hosted in lignite, though there is sandstone-hosted mineralisation beneath and near Ambassador.

EAMA won a court battle over ownership of the deposit and plans to accelerate exploration activities.

In 2010 EAMA said it was developing the Mulga Rock deposits. A scoping study was undertaken, centred on the Ambassador deposit, with production envisaged both from open-cut lignite and in-situ leach mining of sandstones beneath.

In July 2012 EAMA said production was several years away as the company needed to complete studies and receive environmental approvals.

The local community of Coonana have a long experience with the nuclear industry − many migrated to Cundalee and then Coonana from SA during and after the Maralinga nuclear weapons tests in the 1950s. 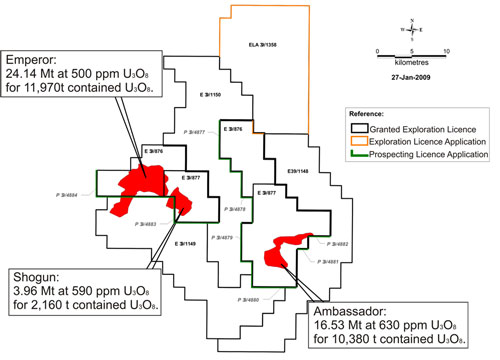