The British government / military conducted three nuclear bomb tests at Monte Bello Islands off the coast of Western Australia . While the Islands were uninhabited, the nuclear tests conducted there spread radioactivity across large portions of mainland Australia – for example one test resulted in ‘radioactive rain’ on the Queensland coast.

The 1983-84 Royal Commission (p.261) concluded: “The presence of Aborigines on the mainland near Monte Bello Islands and their extra vulnerability to the effect of fallout was not recognised by either [Atomic Weapons Research Establishment – UK] or the Safety Committee. It was a major oversight that the question of acceptable dose levels for Aborigines was recognised as a problem at Maralinga but was ignored in setting the fallout criteria for the Mosaic tests.” 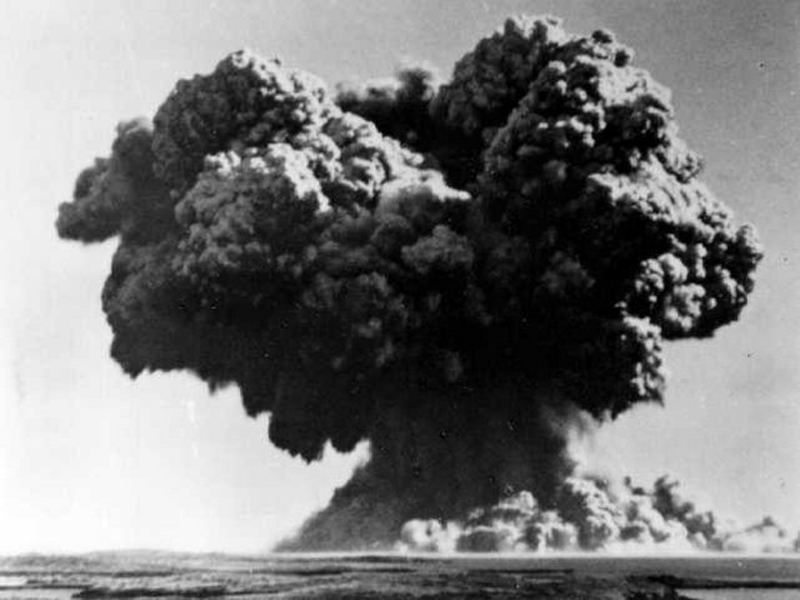 Here is a (soundless) video of the first nuclear bomb test carried out in Australia, 3 October 1952:

Sixty years since Britain tested its first atom bomb in Australia, those who witnessed the blast – many who now have cancer – have reunited to talk about how it changed their lives. The veterans are still seeking an apology from the Federal Government and appropriate health care for them and their children.

Official records say those serving on the HMAS Murchison on October 3, 1952, were 70 miles away when Britain successfully detonated an atomic bomb on the Monte Bello islands, off the coast of the Pilbara in Western Australia. But to this day, many who were there say they were much closer.

Michael Rowe was on board the ship and remembers the moment the bomb went off. “We were told to face east, which we did, and then we were told we could turn around and face west and we saw the first British atom bomb go off,” he said.

Mr Rowe is among those who attended a lunch at a Navy base in Sydney with other veterans and their families to mark the anniversary. “I think it’s an important day in our lives. It’s 60 years after we were at Montebello when the Brits set off their bomb,” he said.

He smiles when he recalls how underdressed they were. “We were clothed to protect ourselves in a pair of shorts and sandals. That’s all,” he said.

Mr Rowe is also among those who say they were much closer to ground zero than what is officially recorded and he has photos which he says proves it.

“All the records show that we were 70 miles away and there was no way in the world you could’ve taken this photograph from 70 miles.”

Mr Rowe says he and others onboard the ship think they were about 12 to 15 nautical miles east of the blast site.

I’ve had a great life. Done lots of things, been lots of places but I always seem to have something wrong with me and it was only on September 19 that I was diagnosed with multiple cancers, terminal cancers.

He is one of the 23 known surviving national servicemen from HMAS Murchison. But like many who were there that day, Mr Rowe now has cancer.

“I’ve had a great life. Done lots of things, been lots of places but I always seem to have something wrong with me and it was only on September 19 that I was diagnosed with multiple cancers, terminal cancers,” he said.

Fellow crew member Ken Palmer was not well enough to attend the lunch but his wife Robyn came in his place.

But some veterans are reluctant to make the link between what they witnessed and health problems later in life.

Ross McPhee has cancer but does not think it is from witnessing the atom bomb.

“I had a wonderful time in the national service. I can’t blame them for any ill effects that I might have suffered in my subsequent life,” he said.

“That was probably just through my own indiscretion – lung cancer from smoking, et cetera.”

Mr McPhee does acknowledge the nuclear test affected him another way.

He said expressed his fear in a rare letter to his mother.

“At that time we were in conflict with the Russians and I thought if they get their hands on this weapon and they fire it, this could affect mankind as we knew it at the time and it frightened me,” he said.