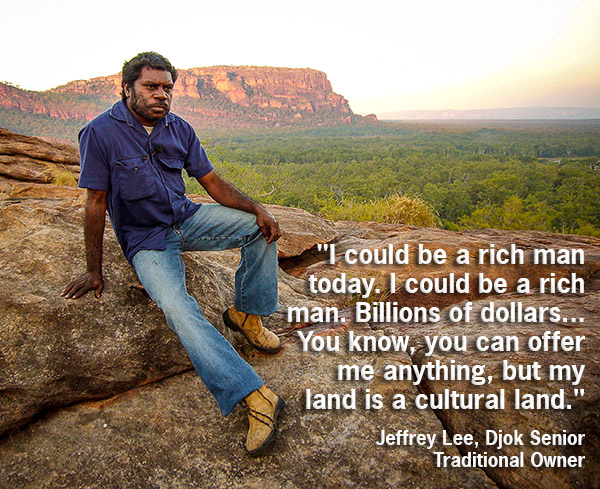 The former Koongarra Project Area (KPA) lies within the traditional lands of the Djok clan and is a region of approximately 12,000 hectares. Until February 2013 Koongarra was excluded from the World Heritage Listed Kakadu National Park, which completely surrounds the area. The region is unique, magnificent and important in traditional storylines that include the Rainbow Serpent and Lightning Man. It is also home to an estimated 15,000 tonnes of high grade uranium which the French nuclear and mining giant Areva has been trying to access and develop for several decades.

Jeffrey Lee, Senior Traditional Owner of the Djok clan, speaks for Koongarra. Mr Lee has long resisted Areva’s promises of wealth and remained firm in his commitment to care for the land. In 2010 Jeffrey Lee asked the Federal Government to protect Koongarra by including it within Kakadu, stating at the time: “When you dig a hole in that country you are killing me. I don’t worry about money at all.” The Government promised to honour his wishes and three years later, in February 2013, it did.

When Koongarra’s protection was announced, Jeffrey Lee acknowledged the inspiration he has drawn from the Mirarr’s struggle: “I also want to thank the Mirarr people and especially the senior traditional owner, Yvonne Margarula, and the Gundjeihmi Aboriginal Corporation. They have stood by me and showed me that Aboriginal people can say no.”

Protection of Koongarra is a long overdue recognition of Jeffrey Lee’s vision and tenacity and a powerful and lasting victory for both Aboriginal and environmental rights.

Below: Jeffrey Lee speaking in 2008