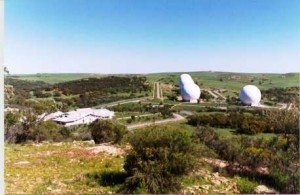 The Australian Defence Satellite Communications Ground Station (ADSCGS) is located at Kojarena, 30 km east of Geraldton in Western Australia. It is operated by the ADF Defence Signals Division (DSD). As of November 2005, the base was staffed by seventy-nine personnel, and housed five radomes and eight satellite antennas. The Kojarena station is a major Australian DSD signals interception facility, and is part of a worldwide system of satellite communications keyword monitoring known as Echelon, which operates within the wider UKUSA signals intelligence system.

Under an agreement initiated in 2007, Geraldton figures in the US–Australia partnership in the Wideband Global SATCOM system, which provides Australian access to the principally US-funded constellation of at least seven (and possibly nine) high-capacity global war-fighting communications satellites. Under the agreement, Australia funded the sixth satellite, due to be launched in 2012–13. The first three satellites were launched between 2007 and 2010, and Australia gained operational access by June 2010.

In November 2007 the Australian government announced the signing of a Memorandum of Understanding with the United States (MUOS) for the building of an additional but separate facility within the grounds of the ADSCGS. This is to consist of three small buildings, three 19 metre antennas, and two smaller antennas, making up a joint US–Australian ground station for the US Department of Defense Mobile User Objective System, a narrow-band networked satellite constellation for Ultra-High-Frequency satellite communications enabling secure all-weather and all terrain 3-G mobile telecommunications.

The Kojarena MUOS facility will be one of four MUOS ground stations, with the others being located in Niscemi, Sicily, Virginia and Wahiawa, Hawaii.