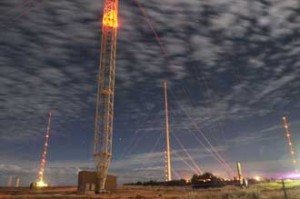 Normally known as North West Cape, the base is used for low frequency communications. It was very likely a high-priority nuclear target during the Cold War.

The Naval Communication Station Harold E. Holt is presently made up of three sites some 60 kilometres apart running the length of the narrow peninsula separating the Exmouth Gulf from the Indian Ocean. The original primary purpose of the US Naval Communication Station North West Cape when it opened in 1967 was to enable the US Navy to communicate with submerged submarines (and surface vessels) in the Indian Ocean and western Pacific Ocean. Two important qualities of Very Low Frequency signals is that they follow the curvature of the earth and hence can be received at great distances, and that they can be detected by receivers more than twenty metres underwater.

Transmission of such Very Low Frequency radio signals required more than a million watts of power and the construction of twelve towers more than 300 metres high to support a network of antenna wires for the transmission of these powerful signals. This 400 hectare site, known as Area A, lies at the very tip of the Cape, and for more than two decades was a key link in US Navy communications, with its Polaris and other strategic nuclear missile submarines. Areas B and C hold high frequency transmission and receiving facilities further south on the peninsula, and until 1998, a Defense Satellite Communications System (DSCS) satellite communications ground station.

Polaris submarines were retired from the Pacific in 1982, and were replaced by Ohio-class submarines carrying Trident nuclear ballistic missiles of much greater range, which relied principally on Jim Creek in Washington for VLF communications. But until that point, Naval Communication Station Harold E. Holt would have been a high priority Soviet nuclear target.

Following the signing in May 1963 of the Agreement with the Government of the United States of America Relating to the Establishment of a United States Naval Communications Station in Australia [North West Cape – Exmouth WA], it became clear that the Australian government had no control over or access to the contents of those communications. In March 1974 the Whitlam Labor government subsequently renegotiated the base treaty, leading to the dropping of the ‘US’ from the name of the facility, and an increased but still for many years insignificant Australian presence. “In the Communications Centre, the only thing the Americans and Australians shared was the coffee pot.”

During the 1980s “joint” operation came to have more substance. By 1992, the United States no longer needed direct access to the base and the long-resident Naval Security Group detachment was withdrawn in October of the year, and full command passed to the Royal Australian Navy. In 1999 Australia took over responsibility for the facility, although US involvement and funding continued
In AUSMIN 2008, as part of the gathering wave of new US military, intelligence and military communications co-operation with Australia, Fitzgibbon and Gates’ signing of the Harold E. Holt Treaty, with Fitzgibbon announcing that: “[T]his Treaty is yet another example of the breadth of the Australia–US Alliance. From the mountains of Afghanistan to the depths of the oceans, Australia and the United States are working together across a wide range of Defence activities aimed at maintaining a secure world.”

PR language apart, Fitzgibbon was quite right. AUSMIN 2007 saw the announcement of a new ‘US strategic and military satellite communications system at the Australian Defence Satellite Communication Station (ADSCS) located at Geraldton in Western Australia’. ACDS at Kojarena, 30 km west of Geraldton, is a major signals interception station operated by the Defence Signals Division, and contributes to the worldwide Echelon system. The new joint Kojarena facility will play a key role in the Pentagon’s complex and continuously developing Global Information Grid.

Renewed and heightened US involvement in the Kojarena and North West Cape facilities for space surveillance and global military signals intelligence and communication has followed on from a decade of rapid technical and organisational developments in the global US signals intelligence interception system of which the Joint Defence Facility Pine Gap is a key part. The result is that Pine Gap, and most likely in turn Kojarena and North West Cape, are increasingly closely tied to US military operations worldwide, but particularly to operations in Iraq and Afghanistan.

The facility first known as U.S. Naval Communication Station North West Cape,  is once again to become a joint Australia-United States facility. The details of the space surveillance sensor systems and radars to be installed at North West Cape and elsewhere are vague at this stage, but AUSMIN 2010 brought us a new “Space Situational Awareness Partnership” with every sign of a Chinese target.

The Naval Communication Station Harold E. Holt at North West Cape, which was originally a US-only facility, then a joint station and, with the end of the Cold War, an Australian-controlled facility, has returned to a primarily US war-fighting role with a vengeance, by two distinct pathways.

The first leads from US concern to retain naval dominance in the Indian Ocean, Persian Gulf and Southeast Asia. North West Cape’s original function was communication with submerged US nuclear missile submarines. Australia took effective control of the station in 1992 and has used the facility to communicate with its own submarines ever since. US submarine-launched ballistic missiles had developed longer ranges some time before, making reliance on missile submarine access to the Indian Ocean less crucial. Until that point, however, Naval Communication Station Harold E. Holt would have been a high priority Soviet nuclear target.

Today the main US concern is communication with US attack submarines.

North West Cape’s return to ‘joint’ status formally began at AUSMIN 2008, with Defence Minister Joel Fitzgibbon and Secretary of Defence Gates signing the Harold E. Holt Treaty. The treaty required Australia to operate a naval communications station, allowed the United States ‘all necessary rights of access to and use of the station’, and split the costs between the two.

The most important aspect of the emphatic US return to this VLF (very low frequency) communications base, given that it had retained access to three of the four communication channels at the facility (with the RAN having the remaining one) was, as Greens Senator Scott Ludlam put it, that North West Cape continues to facilitate, enable and support nuclear armed submarines, offensive attack weapons platforms, thereby legitimising the retention and deployment of nuclear weapons.

The second and quite new pathway derives from Australia’s decision to support the United States’ quest for military dominance in space. Through a new Space Situational Awareness (SSA) Partnership signed in 2010, the United States intends to establish a powerful space surveillance sensor in Western Australia, preferably at North West Cape.

This will be part of the US global Space Surveillance Network (SSN), which will have two principal functions. The first, emphasised by theAustralian government, is to provide a global public good through detection and location of the large volume of space debris orbiting the earth and threatening to damage the satellites on which our networked society depends. However, the SSN has another and equally, if not more important role, for the US military, which is to use the same capacities to detect objects in space for offensive and defensive aspects of war-fighting in space.