The Beverley Four Mile deposit lies 550 kms north-east of Adelaide, just west of the Beverley uranium mine. The project is a joint venture between Quasar Resources (75% − an affiliate of Heathgate Resources, which is in turn a subsidiary of notorious US corporation General Atomics) and Alliance Craton Explorer (ACE − 25% − a subsidiary of Alliance Resources). Heathgate is the proposed mine operator. 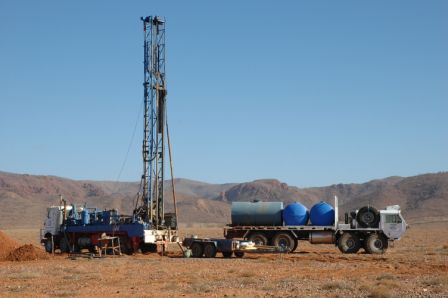 The Beverley Four Mile deposit contains an estimated 32,000 tonnes of U3O8 (indicated and inferred). Used in power reactors, that amount of uranium would produce over 4,500 tonnes of high-level nuclear waste (in the form of spent nuclear fuel) and enough plutonium to build over 4,500 nuclear weapons (1% plutonium in spent fuel; approx. 10 kgs of ‘reactor grade’ plutonium for one nuclear weapon).

The major customer for the uranium is likely to be the US, a nuclear weapons state which has no intention of fulfilling its binding disarmament obligations under the Nuclear Non-Proliferation Treaty and which has for many years blocked progress on the Comprehensive Test Ban Treaty and the proposed Fissile Material Cut-Off Treaty.

A 10-year mining lease was granted on 26 April 2012 spanning 12206 hectares adjacent to the Beverley tenement, also owned by Heathgate. A Mining and Rehabilitation Program must next be approved by the South Australian Department for Manufacturing, Innovation, Trade, Resources and Energy before mining at Beverley Four Mile can commence.

The project will use the in-situ leach (ISL) mining method, planning wellfields of the same design as those currently used on the Beverley mining lease, and the construction of a satellite facility on Heathgates’ existing Beverley mining lease close to the Four Mile deposits. The satellite plant would remove the uranium from the pregnant liquor, producing uranium bearing resin, which would then be trucked to the existing Beverley processing plant to strip the uranium from the resin and then process the uranium. The liquid radioactive waste produced will be disposed of in the aquifers at Beverley. Alliance puts the mine’s life at over 15 years, and claims it has the potential to be the largest and highest grade ISL mine in the world.

Alliance has formed a strategic alliance with Japanese Fortune 500 company ITOCHU Corporation. The terms of the alliance will allow ITOCHU Corporation, through its wholly-owned subsidiary NURA 3, to acquire up to 40% of Alliance or its subsidiary ACE, pending shareholder approval and the resolution of litigation with Quasar. Alliance anticipates that the funds raised through this alliance would be enough to bankroll the development of Four Mile as a stand-alone project with its own uranium processing plant at Four Mile, rather than as a satellite project of the Beverley uranium mine.

Turncoat Peter Garret (then Minister for the Environment) approved the Beverley Four Mile mine in July 2009. Only a Public Environment Report was required of the proponents rather than a more rigorous Environmental Impact Statement process. 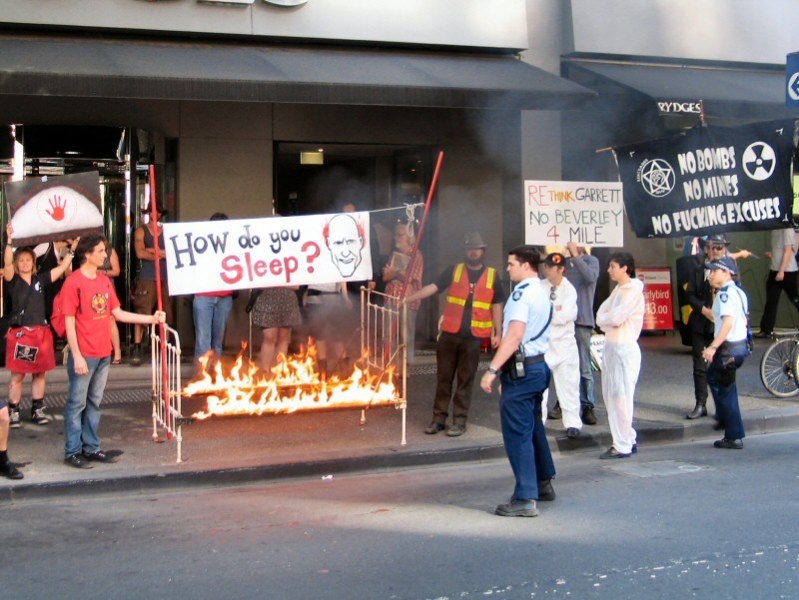 Above and below: Protest in Melbourne against Peter Garrett’s approval of Beverley Four Mile 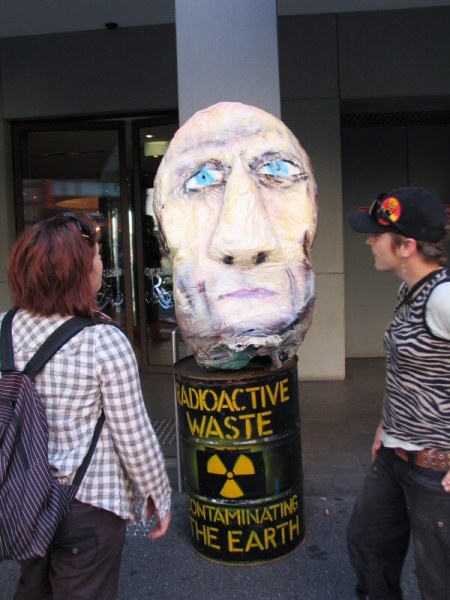 Although it had also been approved at the state level, granting of a mining lease was delayed due to litigation between the joint venturers concerning the Native Title Agreement and other matters, including ACE accusing Quasar and Heathgate of withholding information regarding the prospectivity of the Four Mile deposits.

The litigation concerning the Native Title Agreement has been resolved, allowing for the registration of a Native Title Mining Agreement and the granting of a mining lease, although the companies remain in the courts in relation to the other matters.

In a 15 July 2009 statement, Adnyamathanha Elders Enice Marsh and Geraldine Anderson called on Peter Garrett to reverse his decision at least until the completion of an investigation being conducted by the SA government into long-standing Aboriginal heritage concerns raised by Adnyamathanha Traditional Owners.

Enice Marsh said Aboriginal heritage clearance was never given: “Women speaking out on sacred women’s sites were silenced and the anthropologists never ever completed those reports. If there are dissatisfied people about where the drilling is going to take place, surely that should be in the report.”

Geraldine Anderson said destroying sites goes against cultural laws. “This Labor Government is saying sorry to the Stolen Generation, on the other hand they’re taking the way of destroying our sites and taking our identity away. So when’s this going to stop?”

Enice Marsh said: “What more can we do to protect our land from being raped by mining companies that are allowed to pollute the water and carve up the waterways, even contaminate the soil with radioactive waste? The general public need to know what is going on and ordinary people need to take action to stop the abuse of our environment.”

In addition to their battle with state and federal governments and mining companies, some Adnyamathanha Elders are battling within their own community. They have formed an Elders Group as a separate forum from the Adnyamathanha Traditional Lands Association. Enice Marsh said: “There have been many attempts over the past 10 years to try and bring greater accountability to what’s happening in Native Title, and to stop the ongoing assault on our Yarta (country). Many of us have tried with very little resources, limited understanding of the legal system and environmental laws, and despite a mountain of bullying, lies and deceit from mining companies, lawyers, and self-inflated thugs in our own community who dare to call themselves ‘leaders’.”

Adnyamathanha community member Jillian Marsh, who has completed a PhD thesis on the Beverley mine, said: “The native title process is not a process that offers any decision making power for Aboriginal people and there are regulations and requirements under the Aboriginal heritage legislation that are yet to be addressed. … Quasar Resources has actually formally stated in one of their archaeological reports that they don’t want women participating in work area clearance, which is totally unacceptable.”

Even those Adnyamathanha custodians who supported the agreement to mine Beverley Four Mile seem unimpressed with the process. Vince Coulthard, chair of the Adnyamathanha Traditional Land Association, told ABC radio on 17 July 2009: “Well I think people have come to the understanding that if they didn’t support it, it’s going to happen in any case so the best thing to do is to negotiate an agreement.”

Like the nearby Beverley mine, Beverley Four Mile will be an in-situ leach (ISL) mine. Dr Gavin Mudd, a lecturer in the Department of Civil Engineering at Monash University, said: “My review of the available literature across the world dispels the myths promulgated by ISL uranium mining companies. It is not an environmentally benign method of uranium mining − it is inherently risky and is unlikely to meet ‘strict environmental controls’. The ISL technique treats ground water as a sacrifice zone and the problem remains ‘out of sight, out of mind’.”

In addition to the pollution of groundwater, another feature of ISL mining is surface contamination from spills and leaks of radioactive solutions. The SA Department of Primary Industry and Resources lists 59 spills at Beverley from 1998-2007.