In February 1998, the federal Coalition government announced its intention to build a national radioactive waste dump in central South Australia. The Kupa Piti Kungka Tjuta – a senior Aboriginal women’s council – played a leading role in the campaign against the dump, as did the Kokatha and Barngala Traditional Owners. Many of the Kungkas suffered the effects of the British nuclear testing program in the 1950s. 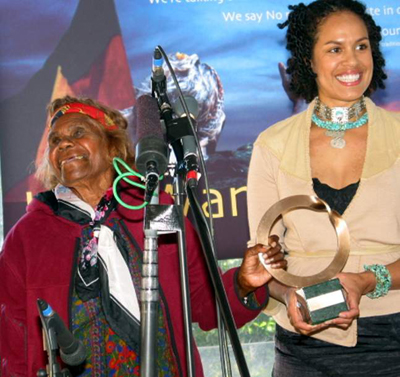 In 2002, the federal government tried to buy off Aboriginal opposition to the dump. Three Native Title claimant groups – the Kokatha, Kuyani and Barngala – were offered $90,000 to surrender their Native Title rights, but only on the condition that all three groups agreed. The Kokatha and Barngala refused, so the government’s ploy failed.

The proposed dump generated such controversy in South Australia that the federal government secured the services of a public relations company. Correspondence between the company and the government was released under Freedom of Information laws. In one exchange, a government official asks the PR company to remove sand-dunes from a photo selected to adorn a brochure. The explanation provided by the government official was that: “Dunes are a sensitive area with respect to Aboriginal Heritage”. The sand-dunes were removed from the photo, only for the government official to ask if the horizon could be straightened up as well.

On July 7, 2003, the federal government used the Lands Acquisition Act 1989 to seize land for the dump. Native Title rights and interests were annulled. This took place with no forewarning and no consultation with Aboriginal people.

In July 2004, the federal government abandoned the plan to build a radioactive dump in SA. The decision reflected the strength and persistence of the campaign against the dump. The victory was also helped by the ruling of the full bench of the Federal Court in June 2004 that the government had illegally used the urgency provision of the Land Acquisition Act.

The Kupa Piti Kungka Tjuta wrote in an open letter: “People said that you can’t win against the Government. Just a few women. We just kept talking and telling them to get their ears out of their pockets and listen. We never said we were going to give up. Government has big money to buy their way out but we never gave up.”