In January 2011 federal approval was given to Samphire Uranium, wholly owned by South Australian company Uranium SA, for a trial In Situ Leach (ISL) uranium mine approximately 20 kms south-west of Whyalla on the Eyre Peninsula and 3.5 kms from the coast. It was ruled “not a controlled action” under the Environment Protection and Biodiversity Conservation Act, hence not triggering the requirement for an Environmental Impact Statement.

At the state level Uranium SA / Samphire Uranium is awaiting approval (as of May 2012) for a Retention Lease over the Blackbush deposit, which is the target of the proposed trial mine. This is the first requirement in a two-step regulatory process. If the mining tenement is granted, the company will need to submit a Program for Environmental Protection and Rehabilitation (PEPR). The company has engaged the Australian Nuclear Science and Technology Organisation to do a series of tests with resins found to facilitate the extraction of uranium from saline solutions, as the formation waters in the sediments containing uranium are saline to hyper-saline. At the time of discovery the extraction of uranium from saline solutions was not commercially practical.

ISL mining routinely contaminates groundwater with heavy metals and radioactive materials by pumping acid into an aquifer to dissolve the uranium and other heavy metals, pumping the solution back to the surface to extract the dissolved uranium, and then pumping the radioactive waste produced back into the aquifer.

Despite the half-life of some radionuclides being tens of thousands of years, the Retention Lease proposal does not assess the impact of the mobilisation of radionuclides and heavy metals in the target aquifer by the ISL process and how this will impact on the future use of the groundwater or the wider ecosystem.

The proposal assumes that since the salinity, radium and uranium concentrations of the target aquifer exceed the limits for any agricultural or potable use, it is acceptable to mobilise radionuclides and heavy metals, and use the aquifer as a radioactive waste dump. It does not address whether the radium and uranium naturally existing in the target aquifer are in the same bioavailable form as the radionuclides that are a product of the ISL process. It also ignores the fact that even if the target aquifer is taken to be confined (which is arguable), the groundwater in this aquifer is not eternally confined, but part of a hydrologic cycle that moves water throughout the ecosystem, from rainfall, to rivers, to underground storage. Given that ISL mining mobilises radionuclides with extremely long half-lives, the long residence time for water in groundwater systems is no guarantee that these radionuclides will not eventually move to another part of the ecosystem, such as the Spencer Gulf.

The trial was originally planned to continue for 12 to 18 months and produce 36 tonnes (120 drums) of yellowcake and 10-20 cubic metres of waste. However, a re-evaluation of the Samphire Project was announced in December 2011, following the identification of uranium mineralisation in the bedrock underlying the recognised Blackbush deposit. As the newly identified uranium would not be extractable by the ISL method which is only appropriate for near-surface deposits, the company is now considering the option of open-pit mining, and has commenced a drilling program. At this stage the ISL trial is planned to proceed, pending approvals, but at a reduced scale. Uranium SA anticipates that site work will commence in 2012.

Uranium SA claims the mineralisation of the Blackbush deposit defined to date may be sufficient to support a commercial mine life of 5–10 years. It is estimated that the deposit could produce 12,700 tonnes of uranium oxide. Add this to the 6,300 tonnes estimated from the Plumbush deposit, also within the Samphire project. 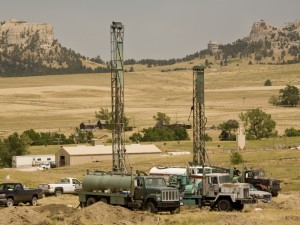