The Kintyre deposit is located near Jigalong and Punmu, Pilbara − 1200 kms north-east of Perth. 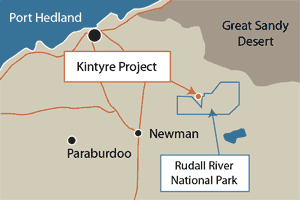 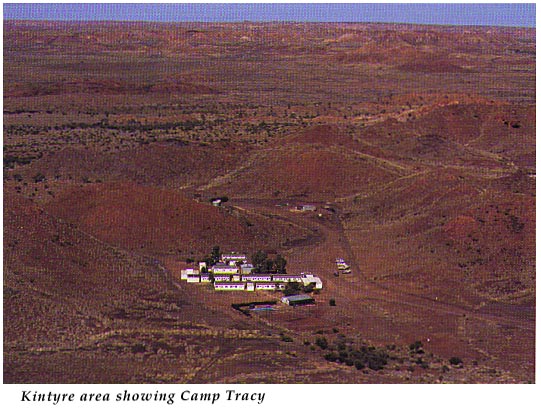 The deposit was discovered by Rio Tinto Exploration in 1985. From 1985-88, exploration by Rio Tinto identified eight deposits at Kintyre. In 1988 the project was put into care and maintenance due to low uranium prices.

In April 1994 the WA government excised 15,100 hectares from the Karlamilyi (formerly Rudall River) National Park, including the Kintyre project area. In 1996 the uranium outlook led to metallurgical testing of bulk samples, but in 1998 the project was returned to care and maintenance due to low uranium prices, and in 2002 continued low prices led to the dismantling of the camp and some site rehabilitation.

In July 2008, Cameco (70%) and Mitsubishi (30%) bought Kintyre for US$495 million, conditional upon state government approval for the sale and agreement with the Martu Traditional Owners. An exploration program to confirm ore reserves commenced in 2009, with a feasibility study envisaged to begin by the end of 2010. In 2010 Cameco said that it envisaged starting mine construction in 2013 and operation in 2015. In March 2011 indicated resources were updated to 25,600 tonnes U3O8 at 0.49%, and inferred resources of 2400 t at 0.47%.

Cameco has submitted a Uranium Project Environmental Scoping Document to the WA EPA which has been approved, but is behind schedule with its Environmental Review Management Plan (ERMP). Cameco states that it hopes to submit a draft ERMP in 2012, and to complete an agreement with Martu Traditional Owners.

In July 2012 Cameco CEO Tim Gitzel said: “With the pounds we have, the economics are where they’re at, so we’re going to have to see some increase to resources there to make it go forward or reduced costs, though we’re not crossing our fingers on that too much because we see Western Australia being charged for some time with all the big projects going on. … We’re looking at it, but given what we have today … we need more pounds, more price or both.”

According to Mining News, the prefeasibility study found that to break even, the project would need an average realised uranium price of $US67 per pound or 62 Mlb of production over its life, as opposed to 40 Mlb currently.

Nevertheless Cameco is undertaking further exploration at Kintyre and is reportedly moving to an 18-month feasibility study, but the project is unlikely to start construction in 2013 as previously envisaged and the CEO’s comments suggest the project may be deferred indefinitely as it was in 1988 and again in 1998.

Several other uranium mining companies are buying up tenements close to Kintyre in the hope of finding uranium seams of the main Kintyre deposit − including Mega Uranium and Encounter Resources / Barrick Gold.

Cameco pulls back further at Kintyre

URANIUM giant Cameco now says it will not move to a feasibility study at its Kintyre project in Western Australia as part of an adjustment of its overall growth strategy. While a prefeasibility study earlier this year found the project to be uneconomic in its current form, the company vowed to push ahead with an 18-month FS. However, the Canadian company said yesterday it would complete the value engineering and the environmental permitting at Kintyre, in order to maintain the ability to proceed with the project. …

The PFS was based on a seven-year open pit mine to produce about six million pounds of uranium oxide per annum, using the measured and indicated resources of 55Mlb at 0.58% uranium oxide. The study found that to break even, the project would need an average realised uranium price of $US67 per pound or 62Mlb of production over its life, as opposed to 40Mlb currently.

Cameco chief executive Tim Gitzel said with uranium spot prices at about $41/lb yesterday, a number of other producers and developers had already cancelled or deferred projects. … Cameco said its strategy to achieve production of 40Mlb per annum by 2018 would now be scaled back to 36Mlbpa by 2018. … Meanwhile, its $430 million purchase of the Yeelirrie project in WA from BHP Billiton was yet to close, with Foreign Investment Review Board approval still pending. …